Perhaps generated by seeds embedded in bird poop; I’m not sure where this tree came from — I never planted it  — but one day there was a little sprout and a few years later it bore its first harvest.

We have two mulberry trees in our yard; the volunteer is fruit-bearing, the other that provides shade to the deck, is not.

Silkworms eat mulberry leaves; maybe I could raise a few silkworms and spin my own fabric — except worms are kinda gross, so I guess not.

Technically, the fruit of a mulberry is not a berry but a collective fruit, in appearance like a swollen loganberry. When the flowers are pollinated, they and their fleshy bases begin to swell. Ultimately, they become completely altered in texture and color, becoming succulent, fat and full of juice.

In appearance, each tiny swollen flower roughly resembles the individual drupe of a blackberry. Mulberries ripen over an extended period of time unlike many other fruits which seem to come all at once. {Wiki} They’re very sweet and mild.

I learned from Martha Stewart to spread an old sheet on the ground and shake the tree. All the ripe fruit fall; I wash, dry, and freeze in quart bags. So far, I have about eight quarts and the tree’s not done. Raccoons come by at night and gorge themselves;  during the day, crows and other birds eat from the very highest branches. 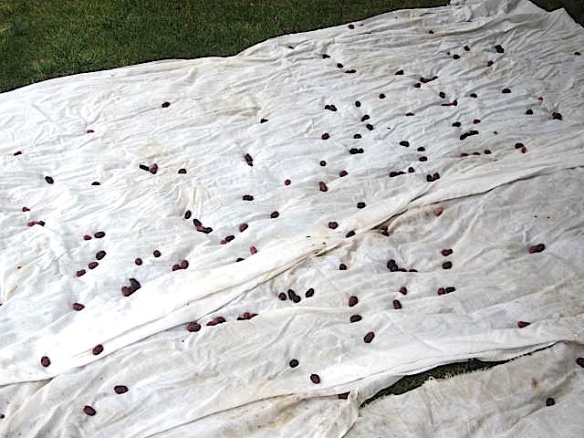 A bowl of mulberries. 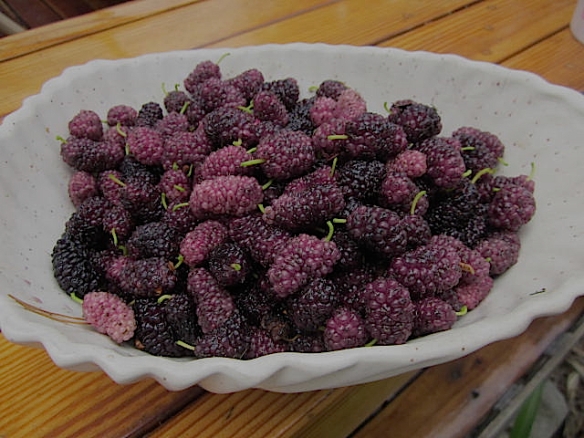 Three beautiful specimens. I add them right from the freezer to smoothies and cobblers and I’ll make a batch of jam, too. If I have enough, I’ll make a pie. 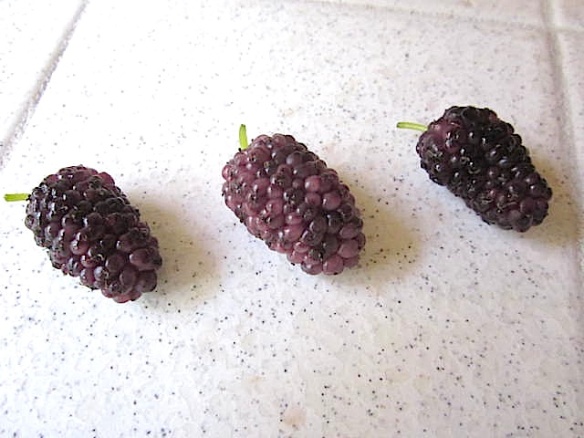 31 thoughts on “Here We Go Round The Mulberry Bush (Tree)”