The loss of a child cannot be fathomed.

Who could ever be prepared for their child to die before them?

There must be endless tears and sorrow and sadness and a forever and unrelenting pain.

For me, it’s a pure and simple matter.

If I never heard my son’s voice again or was never able to wrap my arms around him, I don’t know if I could take another breath.

…On Wednesday, November 13, 2013, Kirk Passmore, 32, a passionate big-wave surfing veteran and Hawaii resident, is presumed to have drowned and as of today his body has not been found.

One minute he was alive, surfing an estimated 20-foot wave at Alligator Rock on Oahu’s North Shore, with an audience of other surfers and photographers.

He dropped into the steep face of the wave before falling over the front of his board and into the water.

The top of the wave crashed over him and witnesses say he surfaced for a brief moment before he was crushed by another wave.

It was the last time anyone saw him.

Although extensive searches have been conducted in the area, he’s been missing since the day of the accident and is presumed drowned.

It was all caught on video.

This is the video of his last wave. Somehow he never made it out alive.

His dad wanted the his final ride shared with as many people as possible.

Maybe you heard about this. Maybe you were watching the news on television and you paid scant attention to the story while you were on the computer or eating dinner.

Maybe you read it on the internet and saw the pictures or the video.

You probably thought to yourself or even said out loud, ” Wow, that’s really sad.”

Why am I writing about him?

Yes, it’s true that he was someone’s child, brother, friend.

But he was also one of my son’s friends.

They went to school together.

He’s the first of my son’s friends to die.

Kirk had the biggest smile and the reddest hair. Everyone called him “Fanta” or “Red”.

He was one of the many boys I’d chauffeur around, packed like sardines in the back seat, all gangly legs and arms, endlessly stuffing their mouths —  bottomless pits of growing boy bodies– with the cookies and smoothies and other snacks cheerfully provided to everyone who came over.

A carful of boys talking about school, skateboarding; laughing, always smiling, always a thank you for the ride as he slammed the car door.

A flash of bright red hair lit the way as he ran up the walkway to his house.

I bet for most of these boys – and I still call these thirty-somethings BOYS because to me they will always and forever be “the boys” or “the guys” — my son’s friends from Kelly Elementary, Valley Junior High, and Carlsbad High School — this is their first experience with death and subsequent thoughts of their own mortality.

I feel so bad for his family and his friends who are mourning him with candlelight vigils, surf paddle-outs, tributes, and memorials.

To honor Kirk, they’re handling their pain with grace and beauty.

One of them, artist Bryan Snyder, created a memorial wall in our town. If you’re ever in Carlsbad, check it out. 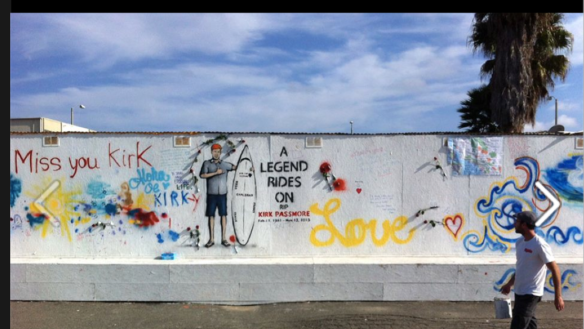 Our deepest sympathies go out to Kirk’s family. Our hearts are heavy and we are so very, very sorry for their loss.

Kirk was born February 11, 1981 in Orem, Utah.  He grew up in Carlsbad, California and graduated from Carlsbad High School in 1999 where he was a member of the school’s surf team for four years.  As a youth, he was active in pop warner football, little league baseball, and basketball but his love was in surfing.

He started coming to Hawaii when he was 14 and was an experienced and expert surfer.  He was not new to big wave surfing, having surfed most of the well-known big wave locations, including Waimea Bay, Sunset Beach, Pipeline and outer reefs on the north shores of Hawaii.  He was a familiar face at Todos Santos off Baja California.  He also surfed Maverick’s in northern California and Puerto Escondido in Mainland Mexico.  He spent 3 years in the southern coast of France.  He moved to the north shore of Hawaii full-time in the spring of 2012.

Kirk was a part owner of Third Stone Surfboards in Waialua, Hawaii and a Manager at Bonzai Sushi in Haleiwa, Hawaii.

The family wishes to thank the Coast Guard, the City and County of Honolulu lifeguards and Fire Department who continue the search.

62 thoughts on “The Unbearable Death of a Boy-Man”