I need to finish the last bits of my empowering road trip, but first must share sad, sad news.

When I woke up this morning, the first thing I did (as always) was to check on the baby hummingbirds.

They have grown so much and by my calculations, would be fledging the nest next week.

I took this picture on Sunday. 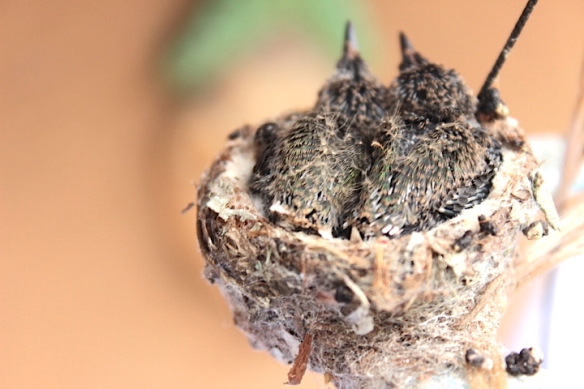 When I didn’t see two little heads bobbing up and down and squirming around, I opened the back door and saw this empty nest. 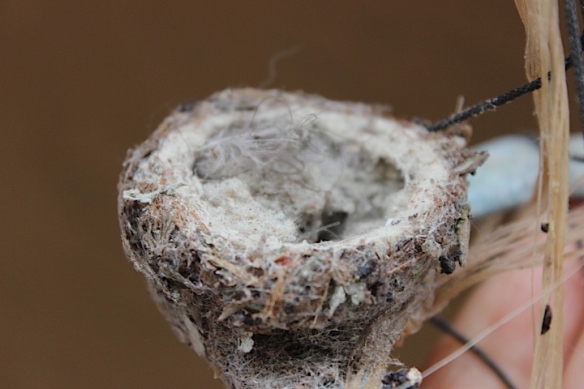 The chimes upon which the nest was built was in disarray and a feeling of dread washed over me.

I knew something bad had happened, but couldn’t find any clues to suggest who or what had attacked the nest.

I had one last hope; that the two babies were in the mulberry tree that shades the deck, and were only trying out their new wings.

But then mom flew by and sat on the nest looking all around.

She was as confused as I was.

Calling out to her babies, I could feel her distress.

Over the course of the morning, she’s flown back no less than a dozen times, looking everywhere for her children, which confirms my worst fear that they were abducted by a raccoon or a crow or even a hawk.

But this story gets worse.

As I climbed on the bench to peer inside the empty nest and to snap a pic, I positioned the nest/chimes with my hand to get a better angle.

When I went back in the house to sit down and email tugboat man the tragic news, I saw tiny little creatures crawling on my hand.

I HAD BIRD MITES ON ME.

After washing my hands and arms more times than Lady Macbeth and dousing my entire upper body with rubbing alcohol, I took a boiling hot shower and scrubbed myself and my hair three times.

The mere thought of a creature in my hair and I knew my life would be OVER. Thick, long, curly hair is hard enough to deal with, but the thought of mites nesting up there provokes extreme mental anxiety.

I threw away the shirt I was wearing and washed the other clothes twice in bleach and hot water, so much bleach that they’re now completely devoid of color at this point.

Then I freaked out that the mites were going to invade the house and with gloves on, cut down the nest and chimes and put them into a sealed bag to put in the trash or somehow keep the chimes if I can sterilize them to my satisfaction.

After that, I found ant spray (the only chemicals around) and sprayed every possible surface on the deck and the eaves where the chimes/nest had been.

Bird mite infestations from nests is a real thing. There are horror stories on the internet about it.

I wonder how long the feeling that things are crawling on me is going to last?

I’m a clean freak ANYWAY, but this is pushing me over the edge, and hub is out of cell range and not available to calm me down and/or offer his sage advice.

An empty nest is bad enough. To be violently snatched from a warm bed in the middle of the night is every mother’s nightmare.

I don’t know what to say to the hummy mom.

Even now, she’s desperately searching for her babies and there’s no way I can tell her that they’re gone forever.

Her heartache is palpable. I can FEEL her pain.

Hub and I fell in love with the whole process, from watching mom build the nest to laying the jellybean sized eggs to watching them hatch and grow.

This is not the ending I could have predicted.

She’s extremely distraught; even as I’m typing this, I still hear her calling to them.

Because of course they do.

A mother’s love has no equal.

I feel like I let down mom down, that she trusted me to help her take care of her precious kids, and I failed miserably.

One of my favorite photos… 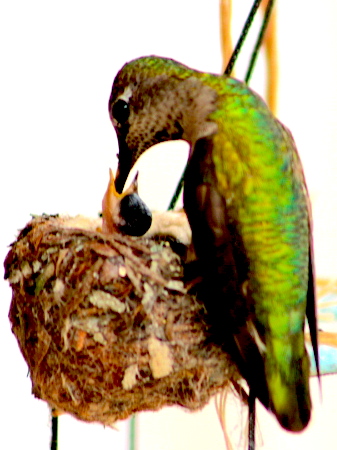