“We pretended that we were the only humans on earth, trekking across an eerie but strangely exciting landscape. It was silent except for an occasional far off bird or the buzzing of a fly. We ate quietly, not speaking, not needing chatter to fill up the silence, until the lack of sound completely settled in around us and we could feel the warm earth beneath our legs anchoring us to this special place.” December 7, 2014

17 Palms Oasis: Hiking with Princess Rosebud and Her Tugboat Man in the Anza-Borrego State Park.

We’ve learned so much from my son.

As in hiking, walking, exploring the beauty of land and nature.

About ten years ago, he gave us the best gift ever, Jerry Schad’s Afoot & Afield in San Diego County. We’ve been avid hikers and campers ever since. Sadly, Jerry died in 2011, but his spirit lives on in his every step that we follow and in his love for the backcountry.

A favorite destination for solitude is Anza-Borrego State Park.

Right now as i’m home, typing in the family room with the patio doors wide open, I don’t hear a single bird, not like we did not so long ago. My bird houses lay fallow; unused, no chirping of hungry babies.

What I do hear, however, is disquietude — the relentless sound of heavy earth movers raping more land in my town, leveling a previously beautiful little hillside, killing all the native plants and displacing the rabbits, coyotes, raccoons, bobcats. Do we really need 1200 more homes? Can we really afford more water and energy consumption, more negative impact on our already overpopulated coastal town?

Here’s our view from the deck, taken with my long lens, beyond Santa and his reindeer.

We fought for years against this egregious overbuilding; this time we lost.

There’s not enough open space; our sojourns to the mountains or the desert are even more precious and as necessary to our personal survival as water and air.

This time we chose to explore 17 Palms Oasis.

Tip #1: It would be a good idea to have a four-wheel drive to get there.

We don’t, but tugboat man’s truck is pretty sturdy so we did OK, but keep in mind there are some really sandy spots.

Tip #2: Carry a shovel just in case, and of course lots of water, even in winter.

These areas are well-known watering holes for the regional wildlife of the Borrego Badlands. The palms at both Oases are often green and brilliant compared to the stark and barren desert that surrounds them.

Nomadic aborigines, wayfaring emigrants, and determined prospectors have all taken shade and water from these islands in the badlands.

Remnants of a time when grasslands, streams, and herds of camels and mammoths covered an ancient landscape, the native palms exist today only because water surfaces here.

As the spring here was unreliable, early travelers with extra water would leave it in large glass jars. Thirsty visitors came to rely on the jars hidden in the shade of the palms. The desert wanderers would leave notes attached to the jars. Today the custom of leaving messages in the prospector’s post office is carried on by visitors. In the post office barrel hidden in the 17 Palms, among the palm tree bases, lies a visitor’s log book, notes and of course, bottles of water!

The 17 Palms area is located off of the S-22. Take the Arroyo Salado Primitive Campground turnoff, travel approx. 3.6 miles on Arroyo Salado Wash to the Seventeen Palms Turnoff which puts you on Tule Wash (you will see a small sign with arrow heading West (right) and travel another 0.2 miles to the 17 Palms parking area. To visit the 5 Palms Oasis continue past Seventeen Palms on Tule Wash to arrived at the Parking area for 5 Palms. Una Palma can be reached by walking over the ridges of the 17 and 5 Palms locations. Or you can go right on Cut Across Trail to arrive at the Una Palma Location.

I think I counted all seventeen palms, but couldn’t locate the oasis ‘cos of our drought. 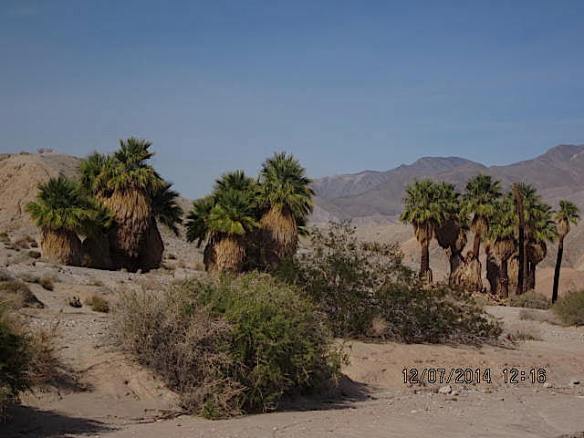 It’s pretty spectacular to see palm trees in the middle of the desert badlands.

Lots of mud as this was once a seafloor. Weird rocks, randomly placed.

Exactly how this rock was stuck in the mud! 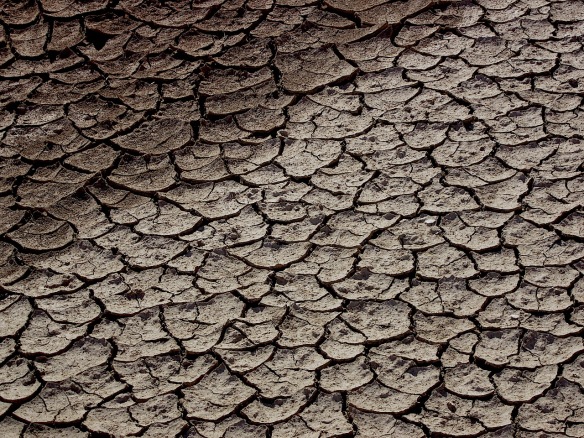 The beautiful but stark and naked badlands. Our view as we stopped for lunch.

We set off cross country as there’s no real trail. We pretended that we were the only humans on earth, trekking across an eerie but strangely exciting landscape.

It was silent except for an occasional far off bird or the buzzing of a fly. We ate quietly, not speaking, not needing chatter to fill up the silence, until the lack of sound completely settled in around us and we could feel the warm earth beneath our legs anchoring us to this special place.

It was warm, almost too hot at eighty degrees. Being out here in the summer at more than a hundred degrees with no shade would be an extreme hardship.

Ahhh…a refreshing cup of ginger tea at the end of a dusty hike. Good times! Angel Boy got tugboat man a JetBoil, an absolutely amazing gift– boiling water in about a minute.

Driving home as the sun sets.

And back to being alone, as my tugboat man left again, but only for two short weeks, hopefully home on the 22nd, fingers crossed.

Take time to actively experience nature. Walk, hike, breathe in all of the beauty of the wild. It’s healing and restorative.

2 thoughts on “Nature versus Destruction”