After the winds and rain subsided, I checked on my garden and discovered two previously hidden cucumbers.

I remember planting a few seeds of the pickling variety but everyone was all mixed up and I couldn’t tell which was which until I saw these gigantic specimens.

I haven’t completely decided if I’ll eat them fresh and possibly not pickle them, because I didn’t discover any others that were ready.

And this one, too, not quite as deformed.

I’ve had success with pickling vegetables, here’s a post about that:
https://enchantedseashells.com/2015/07/06/easy-peasy-refrigerator-pickles-meatlessmonday/

There was an unexpected sprinkle this morning; not forecasted, but welcome nonetheless. 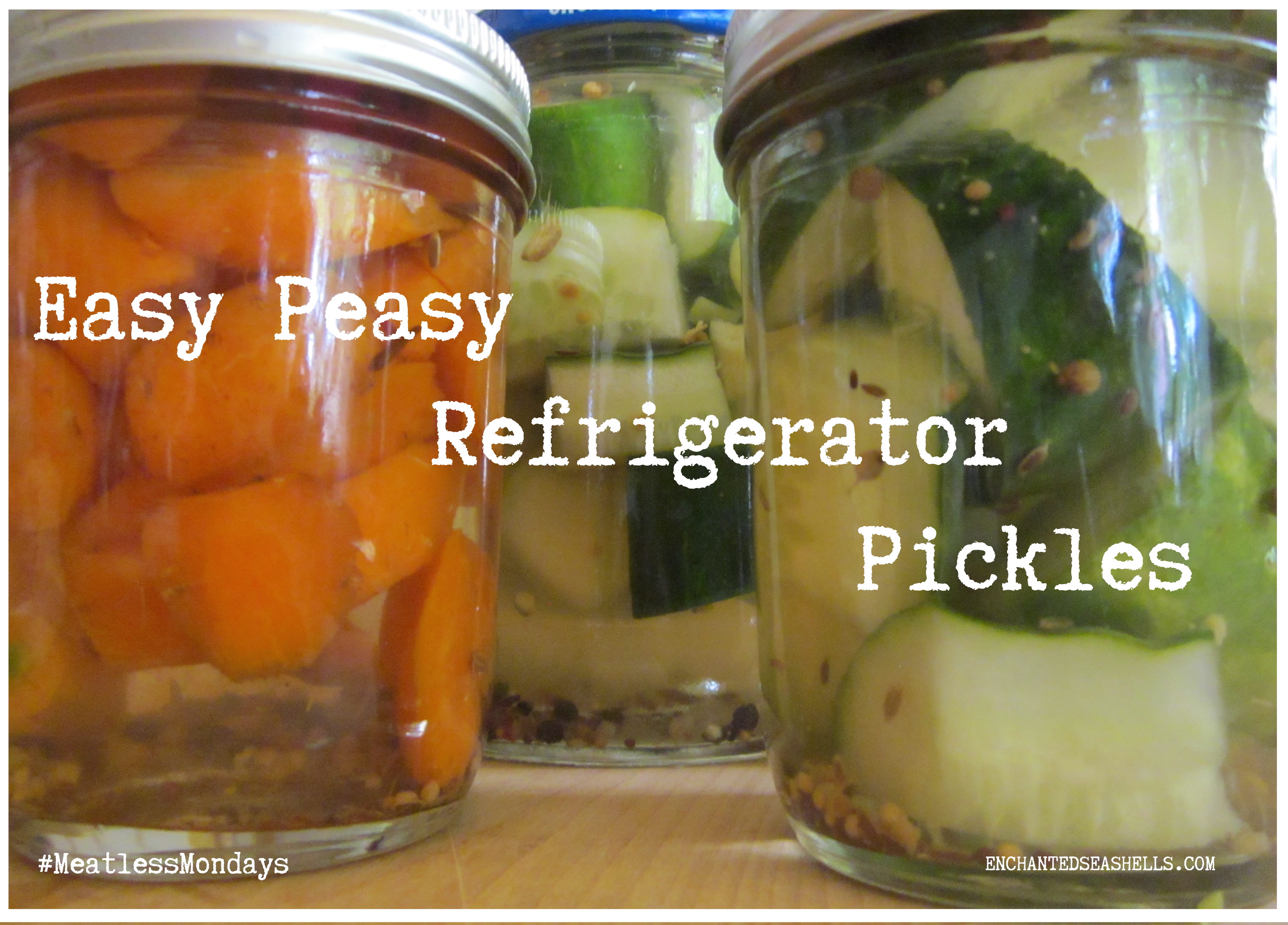 I spent the day harvesting cucumbers and trying to figure out a way to preserve them.

Freezing definitely doesn’t work for cucumbers, but everyone loves my homemade pickles, so that’s what I’ll do.

There’s a real sense of satisfaction in seeing the jars lined up on the shelf — a connection to the simpler times of harvest and preservation — no stores needed, just garden bounty and the proper ingredients. 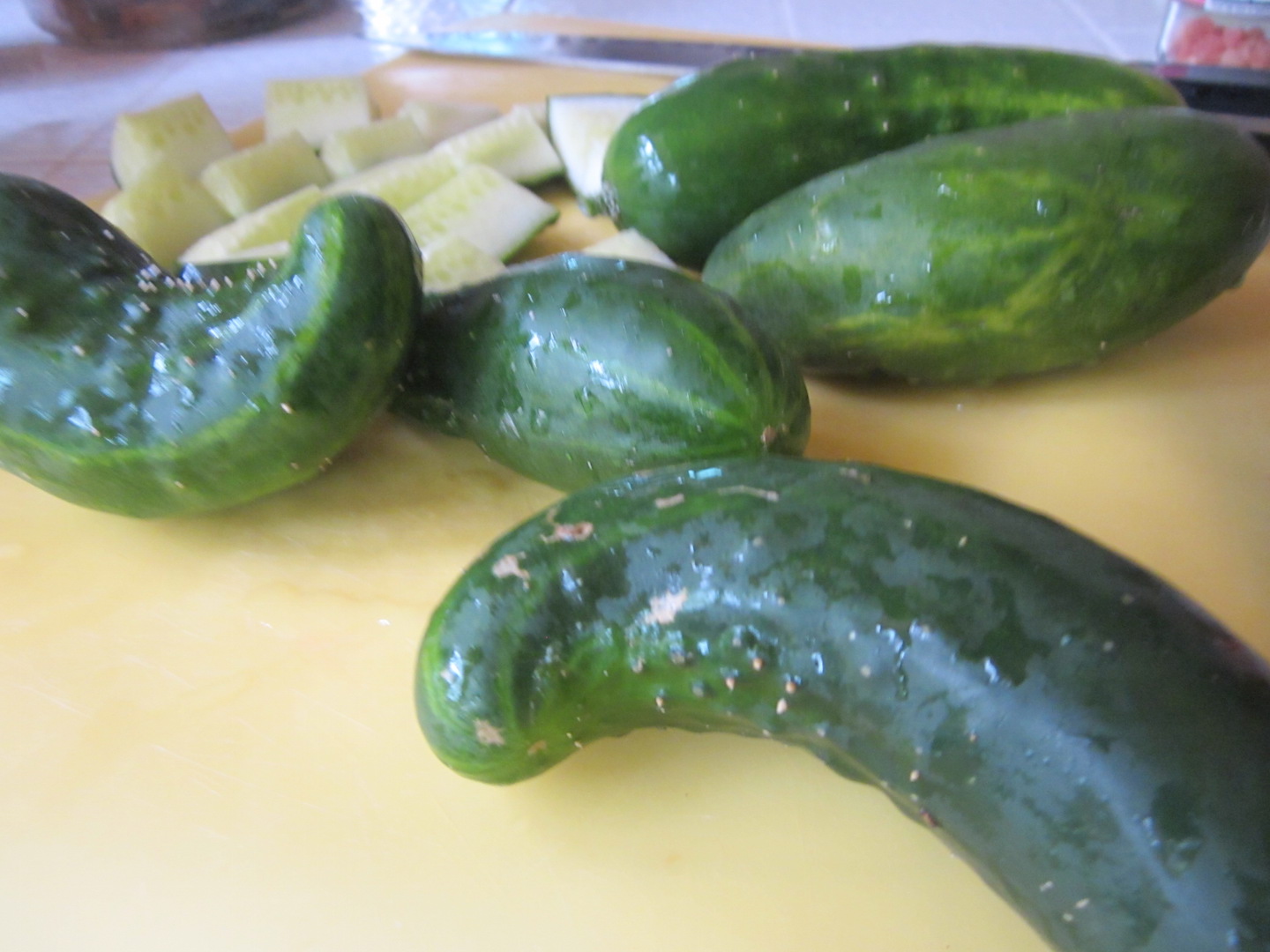 I pickled the cucumbers, dug up some carrots, and thought I’d get super creative and TRY pickling kale because there’s just so much of it.

Use the same brine for the carrots and kale; the only change is the addition of a lot more garlic to the kale. 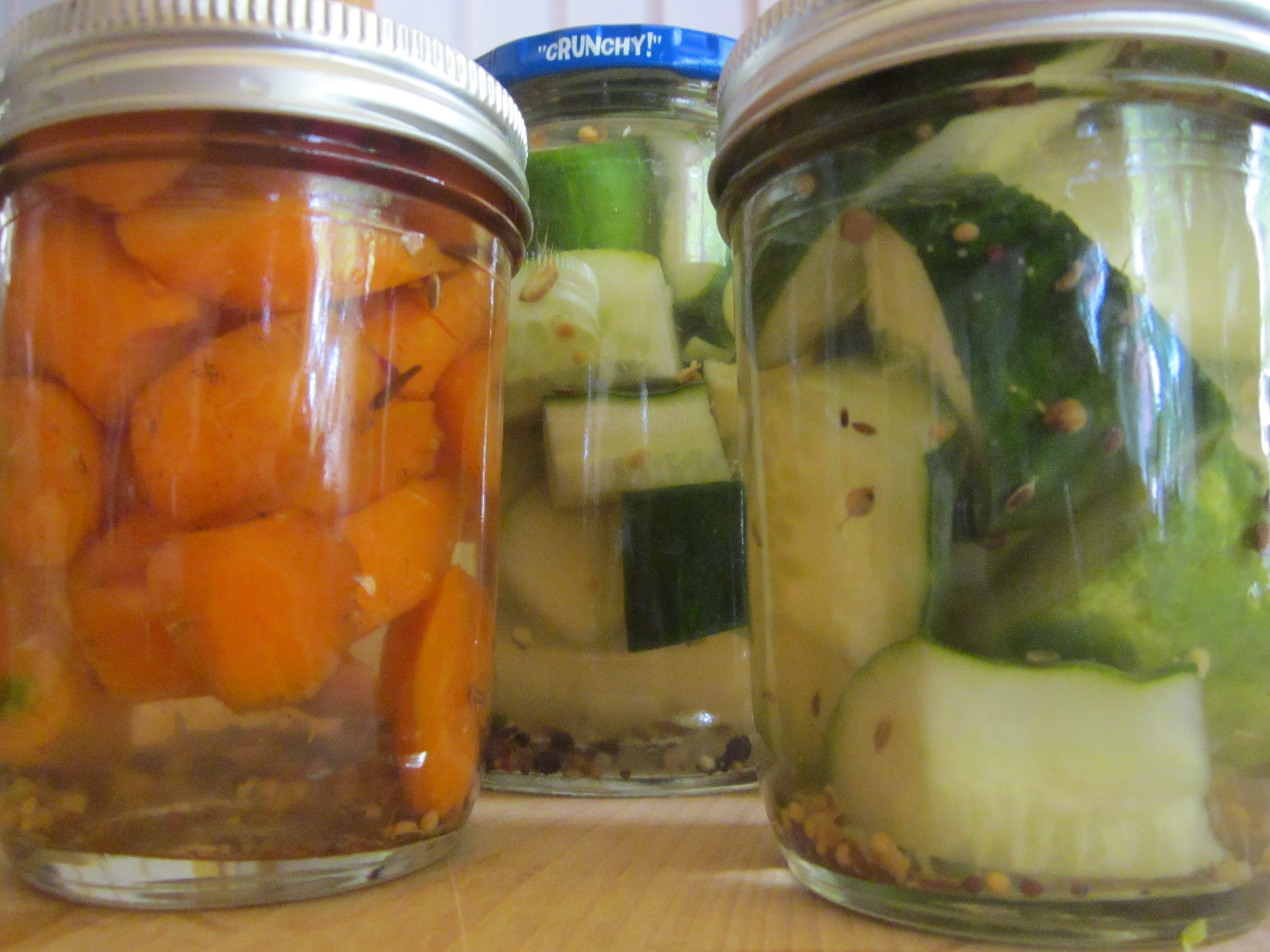 Prepare the jar(s) by running through the dishwasher or washing it in very hot soapy water and letting it air dry. Any glass jar with a lid will do; the wider the opening, the easier.

For the crunchiest pickles, select firm, dark-green pickling cucumbers that have not started to ripen to white or yellow. Cut them into spears, slices, or chunks (left whole, they will take a long time to pickle in the fridge).

I read somewhere (can’t remember where) that the ends need to be cut off or it’ll create a mushy pickle.

Place the dill in the bottom of your jar, peel and crush the garlic cloves (if using), and drop that in along with the peppercorns (if using), then put in the cut cucumber.

Mix the salt, vinegar, and water in a separate container, stirring until the salt is dissolved, then pour it over the cucumbers, filling the jar right to the top.

If you’re in a hurry to enjoy your delicious pickles, heat the vinegar, water, and salt to a boil before pouring it over the cucumbers. Pop on the lid and put the jar in the fridge.

For kale, make sure it’s super clean with no dirt or sand lurking anywhere, ‘cos no one wants to eat gritty greens!

Shred as you would cabbage for slaw.

I actually mixed collard greens with the kale.

Place a few garlic cloves in the bottom of the jar(s) along with the pickling spices and dill.

Pack tightly into the jar(s) and pour vinegar mixture all the way to the top. 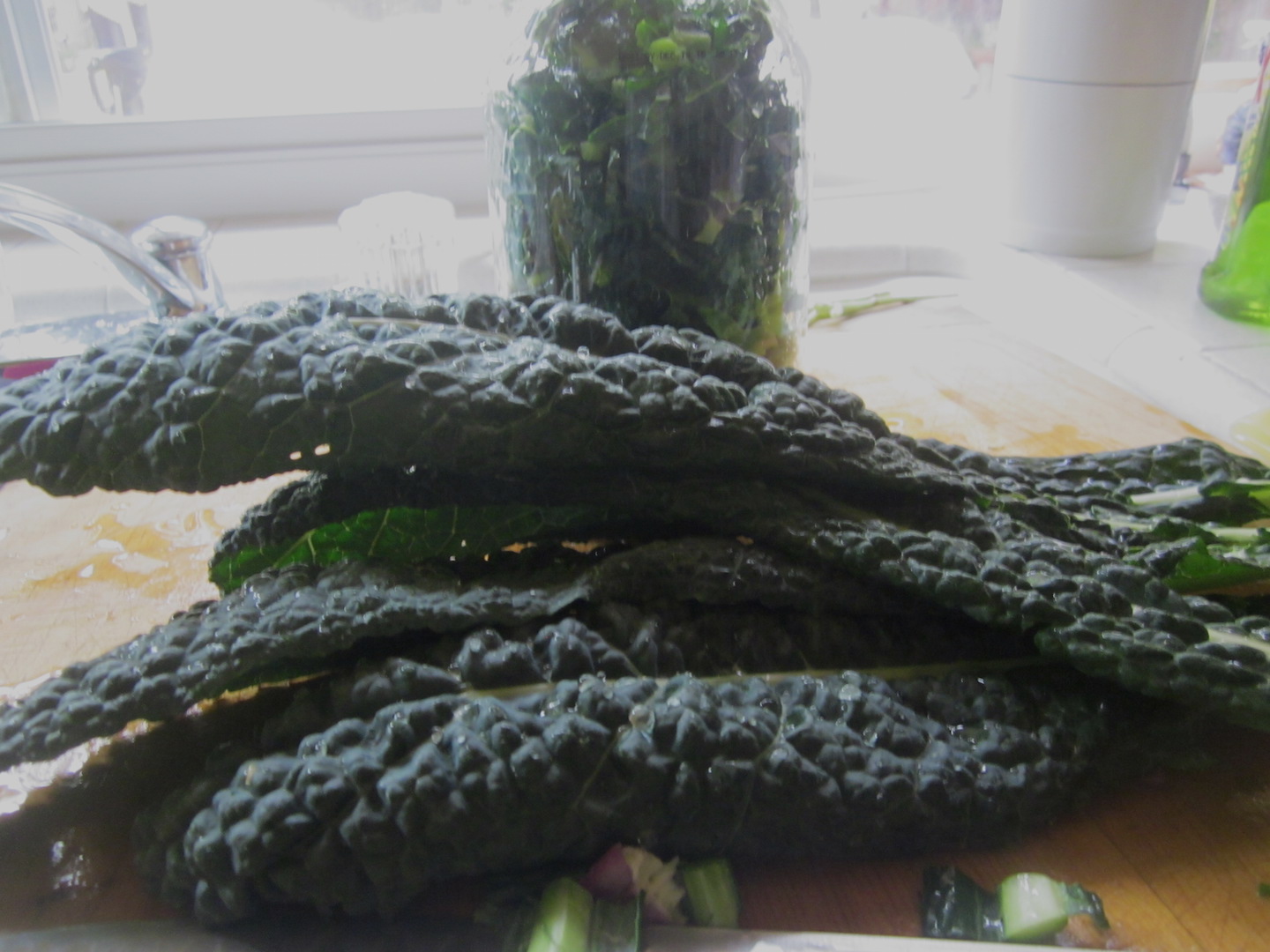 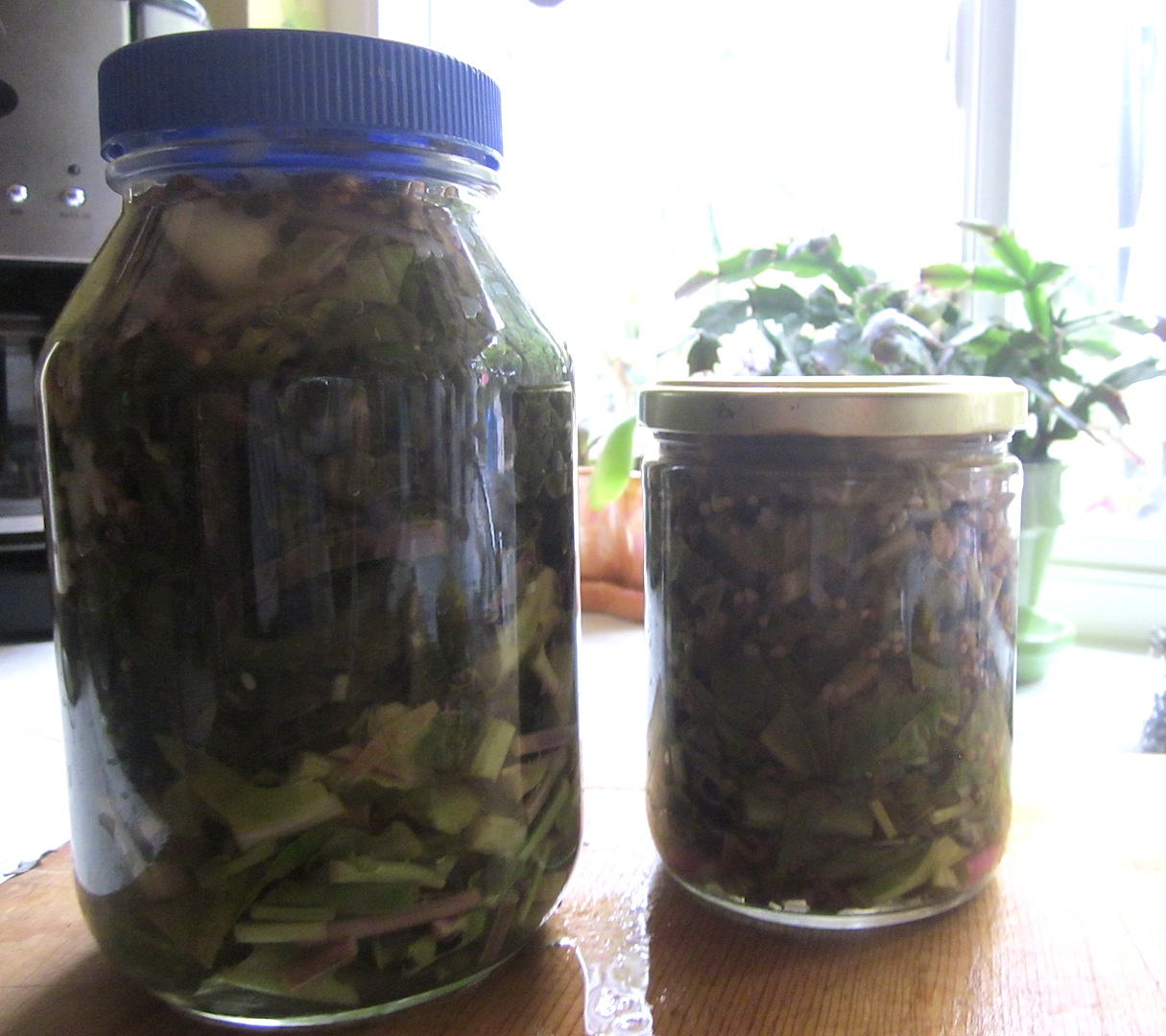 I’ll let you know how the kale tastes after a few days of relaxing in the brine spa.

Do you pickle or can? How do you preserve your garden’s harvest?