Today blog is my not-so-humble brag about the original Angel Boy. I am so very proud of him.

I talk an awful lot about the second boy who stole my heart, AB 2.0, my curly haired free spirit/sprite, but there is still the one who owns MOST of my heart, his daddy… 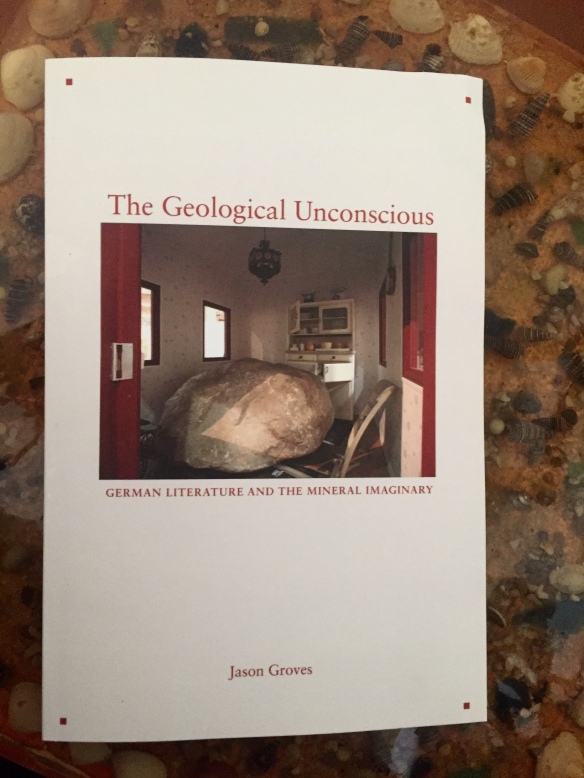 …WHO WROTE A BOOK THAT GOT PUBLISHED!!!

Title: THE GEOLOGICAL UNCONSCIOUS
GERMAN LITERATURE AND THE MINERAL IMAGINARY

“Already in the nineteenth century, German-language writers were contending with the challenge of imagining and accounting for a planet whose volatility bore little resemblance to the images of the Earth then in circulation. The Geological Unconscious traces the withdrawal of the lithosphere as a reliable setting, unobtrusive backdrop, and stable point of reference for literature written well before the current climate breakdown.”

“Through a series of careful readings of romantic, realist, and modernist works by Tieck, Goethe, Stifter, Benjamin, and Brecht, Groves elaborates a geological unconscious—unthought and sometimes actively repressed geological knowledge—in European literature and environmental thought. This inhuman horizon of reading and interpretation offers a new literary history of the Anthropocene in a period before it was named.”

“These close readings show the entanglement of the human and the lithic in periods well before the geological turn of contemporary cultural studies. In those depictions of human-mineral encounters, the minerality of the human and the minerality of the imagination become apparent. In registering libidinal investments in the lithosphere that extend beyond Carboniferous deposits and beyond any carbon imaginary, The Geological Unconscious points toward alternative relations with, and less destructive mobilizations of, the geologic.”

It might take me as long to read it as it took him to write it ‘cos it’s definitely going to stretch all of my working brain cells which are more used to reading chicklit by Jennifer Weiner or Sophie Kinsella, but it’s IMPORTANT to read things that are outside our comfort zone. WAY OUT.

This is the kind of book you need to read with a dictionary and Thesaurus very close by.

“An impressive and accomplished study that delves deep into the layers of German mineralogical imagination from Goethe to Benjamin. Stones may not be able to speak, but they have found their spokesman. A pleasure to read.” (Geoffrey Winthrop-Young, University of British Columbia)

“The Geological Unconscious offers subtle close readings of several canonical texts that receive provocative illumination from ecocriticism. The book’s focus on the instability of ground is insightfully paired with a consideration of how already in the nineteenth century literary style and narrative register geological time and planetary wounding.” (Catriona MacLeod, University of Chicago)

The author, Dr. Jason Groves, is Assistant Professor of Germanics at the University of Washington. He is cotranslator of Werner Hamacher’s Minima Philologica.

3 thoughts on “Happy Birthday to MEEEEE!”