I don’t know if it’s caused by all the current planetary behavior (as above, so below) but lately my dreams have been excruciatingly real and detailed. Some of them are so vivid that I’m able to retain enough of them to journal before they disappear like a mirage in a puff of ephemeral smoke.

THIS particular dream went beyond the limits of what my brain can comprehend. (If goose bumps and hair standing up on your arms is any indication)

I was exhausted but satisfied by the completion of a tough garden project, replanting a flowerbed from where I had moved about 150 pounds of white rocks. What once was a cool mini desertscape had devolved into a tangled mess of climbing aloe and not very happy succulents and cacti. I removed them all, raked up the truckload of small white rocks that were all dirty and sad looking, and planted Bird of Paradise and Clivia I dug up from another part of the garden. Both have orange-y flowers and will look so pretty against the house.

The next day was going to be full of stress and anxiety because oral surgery was scheduled and I wasn’t looking forward to it at all. Thinking about the impending pain triggered all kinds of panicky ruminations.

I must have fallen asleep when I felt Bandit, my cat, jump on me, landing hard like she would do to wake me up (she was the real princess around here), and she curled up next to my stomach just like she always did, and I actually put my hand out to pet her and that’s when I freaked out and woke up.

Bandit spent her nights sleeping with me; most often would end up under the covers near my feet.

Nothing too strange about that, right? That’s what cats do.

OMG. The fact of the matter is that this is 2020 and Bandit went over the Rainbow Bridge in 2010 from complications due to chronic renal failure.

Bandit has been dead for ten years. She was thirteen-years-old when she died.

IT WAS SO REAL.

I looked at the clock. It was 3:00 a.m. I was now completely awake; my heart was racing. I never could get back to sleep. I still felt the warmth of her body, the silky feel of her fur tickling my arm. I felt her presence and it was REAL. I miss that little girl so much. I really really need her love and her comfort.

Was I in a lucid dream state or did Bandit really and truly visit me from beyond?

All I know is that I was so stressed when I was at the surgeon’s office today,  I  hyperventilated and my blood pressure was too high, so I started to visualize my beloved Bandit and it brought down my BP almost immediately. She was able to offer comfort even though she’s no longer physically on this earth. Her love for me transcended everything that my logical mind has a hard time comprehending.

—Lucid dreaming is when you’re conscious during a dream. This typically happens during rapid eye movement (REM) sleep, the dream-stage of sleep. During a lucid dream, you’re aware of your consciousness. 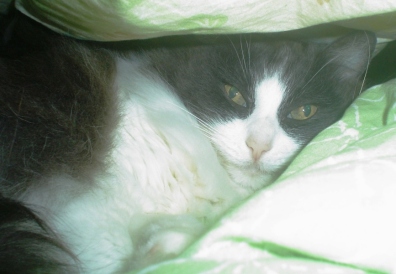 This is my beloved Bandit (deceased) who allowed us to share her sofa-sometimes.

10 thoughts on “Was it a lucid dream or a visit from beyond?”