The eagle was sitting on that branch waiting for everyone to stop pointing at him so he could swoop down and take a better look at a huge dead fish that washed up on the shoreline.

My neck hurt because I couldn’t believe that I was actually in the presence of an eagle, my very first ever sighting, and I wouldn’t look away until he was gone.

Now I can cross that off my mental list….I’ve seen wolves and mountain lions and bears and of course, my favorite: coyotes.

Not all at the same time, but these are the special pearls in my necklace of life experiences, memories strung together since most of them happened so fast and were such brief encounters that I didn’t have time to take photos.

I wish I had brought my big lens in addition to my iPhone, but it’s good enough as it captured the special moment.

These are admittedly crappy photos, but it’s most definitely a Bald Eagle. I know they’re considered a nuisance in parts of Alaska, but this wasn’t a common occurrence at this location. I didn’t even try to look for an eagle feather because I’m aware that under the current language of the Eagle Feather Law, “unauthorized persons found with an eagle or its parts in their possession can be fined up to $250,000.”

“There’s a raccoon. Look at that!”

I thought he was joking because it was the middle of the day and we were on a sandy beach so I continued to keep my head down to look for seashells.

When I finally looked up, there he was. 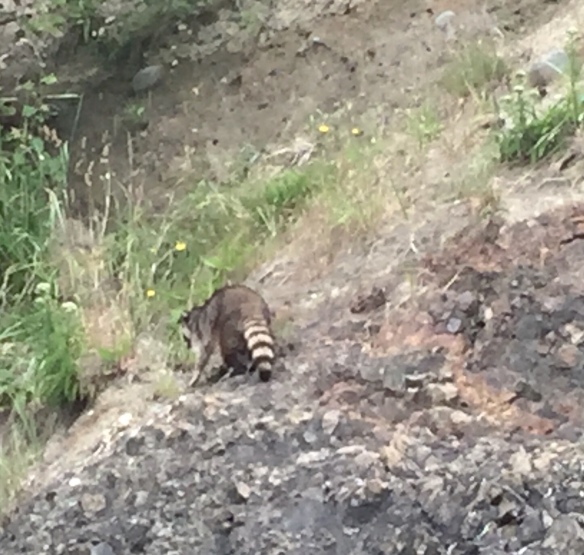 He scampered up the bluff and was gone.

What an amazing day! An eagle and a raccoon.