This is a cautionary tale to be diligent, alert, and always pay attention when you’re doing something as simple as walking…

Since we’re between storms, this was a beautiful morning for a walk. As I headed toward the beach, there’s an intersection with a four-way stop. (For those of you who know Carlsbad, it’s Chinquapin and Adams.)

At the time I safely proceeded to cross at the crosswalk, there were no cars. As I was almost all the way across the street, three-quarters of the way to the other side, a small-ish SUV caught my eye because the car didn’t seem to be slowing down to stop at the stop sign and I was directly in the line of fire.

It seemed as if she was planning to roll through the stop sign and hit me!

I stopped, yelled “HEY!” as loud as I could, which got her attention and she screeched to a halt, inches away from me.

She looked extremely flustered, surprised and guilty; proof that she had absolutely not seen me. I know I’m small, but I’m not invisible. Sheesh.

After that, I emitted a few dozen choice words and tried to get her license number as she sped off but not before I saw that she had a photo of a baby hanging from her rear view mirror. She was a mom and might have even put her child in harm’s way.

That’s a close enough call with death for one day, or at least a close call with a potentially painful accident.

The moral of the story is to stay alert and don’t trust that a driver will pay attention or even obey simple rules of the road.

Anyway, I’d like to thank my guardian angels for protecting me one more time!

This is a strange story.

I lost (or misplaced) three valuable (only to me) items a couple weeks ago.

I couldn’t locate my pointe shoes and it was driving me CRAZY. I literally turned the house upside down because NEVER in a million years would I even accidentally toss them out. I had stowed them in a safe place because I planned to wear them for the littlest ballerina.

I could see them in my MIND, folded properly as I had been taught, in a gray toe shoe bag along with my soft ballet shoes, hung up SOMEWHERE.

Nowhere that I could suss out, that’s for sure. After three exhaustive and anxious searches of the entire house, I had to radically accept the fact that actively hunting for them wasn’t going to work. I had to eradicate their potential loss out of my mind because I was becoming too stressed.

At the same time I couldn’t find one of my favorite scarfs that was a gift from my Angel Boy, along with a logo hat from the university where he teaches.

The reality is that I don’t often LOSE or misplace anything. Even with my admitted mild hoarding issues, I’m extremely organized. I have more than a thousand seashells and they all have a home, and they are all loved.

When I was younger and couldn’t find something, my mom and I would call out to each other, “the Borrowers took it”, referring to that adorable series of books by Mary Norton. This time, I whispered it to myself, shaking my head at the strange coincidence of multiple unaccounted for losses.

How crazy is it that just now I found ALL THREE previously nowhere-to-be-found treasures within minutes of each other!

As I hung up a couple of freshly laundered hoodies on the pretty little jewel shaped over-the-door hooks on my bedroom door, for some reason I looked down at the inside doorknob and…obscured under a Yale backpack, I saw that little gray bag containing my pointe shoes. I was gobsmacked (to borrow a Brit term). Although I had absolutely given the door a cursory examination, I never physically searched more thoroughly.

But there they were. UNREAL. 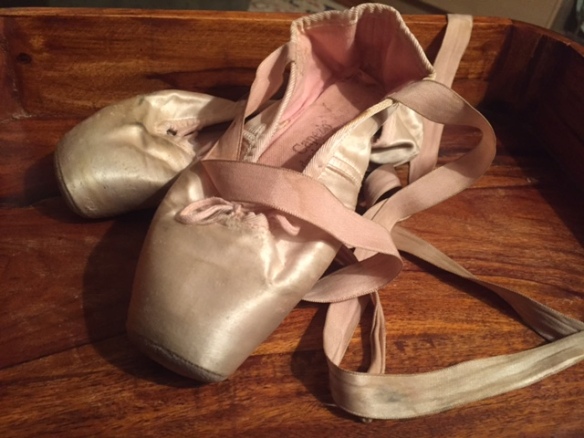 Even more strange is that within the next couple of minutes, I also found the scarf and hat tucked away in plain sight on the sofa — WHERE I HAD LOOKED SEVERAL TIMES BEFORE.

Were those things there the whole time I was looking, or did they magically appear? So many questions are swirling around my brain. Were they really lost at all? How could I not see what was unquestionably right in front of me?

I can’t explain why or how but I’ll share that I felt a huge weight lifted off of me, like I was being held aloft by a joyous balloon. I know that sounds odd, but it’s true.

Was it some sort of planetary influence that kept my beloved treasures concealed from me? Did a portal spontaneously open? Did these three things–pointe shoes, a scarf, and a hat –become transported and spiral into another dimension; an alternate universe? Am I living inside an episode of the Twilight Zone?

l have no idea, but whatever the reason, I’m now free of the uncertain torment that had plagued me for a couple of weeks.

That feeling of loss negatively disrupted my normal sense of control. When we lose something valuable, our ability to consciously control is triggered. I felt helpless, that’s for sure, The truth is that losing things can have a devastating effect on our emotional wellbeing. Yup.

And now I’m happy, so it all makes sense. Sort of. I’m still shaking my head.

What does it all mean?

Last night I totally freaked out. I was watching my new obsession, Aussie Gold Hunters, and I heard a noise. My heart started to pound…

It sounded like there was some kind of creature in the house–in the room where I was on the sofa watching TV.

I muted the sound and looked around to try and figure out if it was coming from under the sofa, under the table, or near the patio doors.

It was a regular sound, kind of like scratching, scrabbling or fumbling, almost as if something was caught or stuck.

I got out a powerful little flashlight and looked everywhere. Then I thought that whatever it could be was trapped behind the entertainment center but there’s no way I can see behind it or move it.

After spending quite a while searching,I was pretty super stressed out. What to do? I straightened up the kitchen, put away in the refrigerator a half bottle of cayenne kombucha that I hadn’t finished, and went to bed, making sure my bedroom door was closed tight just in case IT tried to find me while I was asleep.

The first thing I did this morning was to check and see if I still heard the noises.

I made my coffee and while it was brewing, I took out that unfinished bottle of kombucha, had a few sips, put the cap back on, and set it on the tile counter. I went to my bedroom to unplug my computer and bring it out so I could read emails and learn about what fresh hell the Supreme Court was doing while I was drinking the fresh French roast.

I HEARD THE NOISES AGAIN!

Now it seemed to be coming from the direction of the tile counter where I had placed the kombucha. I put my ear near the cap and heard the very same sounds that had alarmed me last night.

OMG. Apparently, my “wild animal” was merely the bacteria-friendly fermented carbonation trapped in the bottle of kombucha.

Did you know this? When making kombucha, bubbles are created during bottling (also called second fermentation). At room temperature, the yeast eat the sugar and create carbon dioxide (CO2). … This is how kombucha becomes fizzy! If your kombucha sprays out of the bottle as soon as you open it, it’s because there is too much pressure inside.

I quite honestly got weirded out over NOTHING. I really am crazy, but very glad to know that no critter was trapped in my house. Whew!