Is it really Wednesday already? On my way to a Pilates class, here’s my contribution: 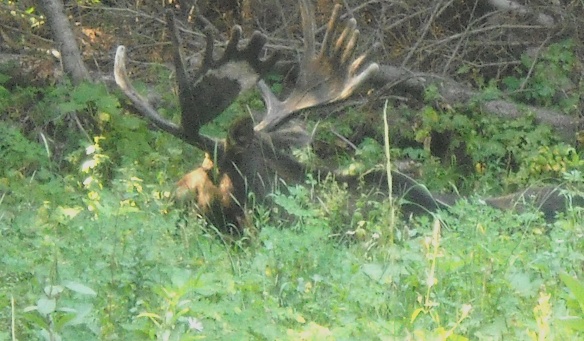 He didn’t move all day. He was about ten feet from the trail when we began our hike and four hours later, he was still there. We watched him for a while, admiring his rack (ha ha) and wondered how anyone could kill such a beautiful creature and mount the antlers on a wall for decoration.

It hurt our heart and soul to think that if this lovely animal wandered off the protected lands of Grand Tetons National Park, he’d be slaughtered.

If I was anti-hunting before this trip, I have become (if possible) even more militantly against animal murder.

At the risk of offending anyone, I’d like to suggest that hunters have sociopathic tendencies. That opinion was derived from an animal rights group and it resonates with me.

I guess this wasn’t so wordless after all.

MIDlifestyle blog. I'm the mom of a wonderful son affectionately called Professor Angel Boy and grandma to Angel Boy 2.0. Love to camp and hike. I've been in a few films, co-produced a surf-related radio show, co-owned a couple small businesses, and co-directed a non-profit organization. I love seashells and rocks, gardening and baking, Hello Kitty, Chanel, and anything sparkly. I've been a veg since 1970 and an ardent animal activist forever. Fashionista...veganista...animal activista...If you don't find me crying myself to sleep, I'm off on a mission to find the perfect shoe!