Perhaps it’s because this is the first day of autumn that coincides with my Angel Boy’s half birthday (we always celebrate) or because he really has left the nest for real this time with his first tenure track professorship (at least on the west coast so we’re closer) but I’m feeling a sense of change along with the the season.

Even in SoCal the weather will eventually morph into a winter of sorts and maybe that’s why this butterfly was in a weakened condition, because there’s no way to tell how the injury occurred,  but she was flying around me and then came to rest on the lawn right next to my new raised bed where I was playing around with the sand dolllars from yesterday’s post.

How do you help an injured butterfly? Can I pick her up and take her to the vet? Can you superglue the torn wing? (I don’t think so) but her ability to still lift off and float on the breeze made me think of her metaphorically.

In fact, it’s a day full of metaphors with my son flying off and away (literally on an airplane as I’m typing this) to become a fully fledged adult with a grown up job and a boatload of responsibility.

But then this butterfly visited me and I’m trying to decipher her deeper message, although maybe a butterfly is just a butterfly.

I do know that even though her wing was damaged, she didn’t give up; she was resilient.

Maybe she just needed a safe place to rest and heal. 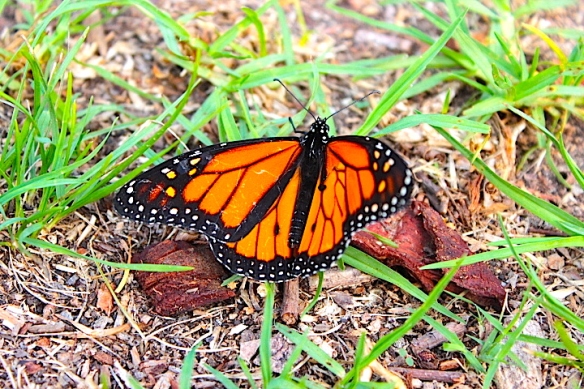 And just like that, she flew away, carried off by the balmy breezes of another SoCal heat wave. 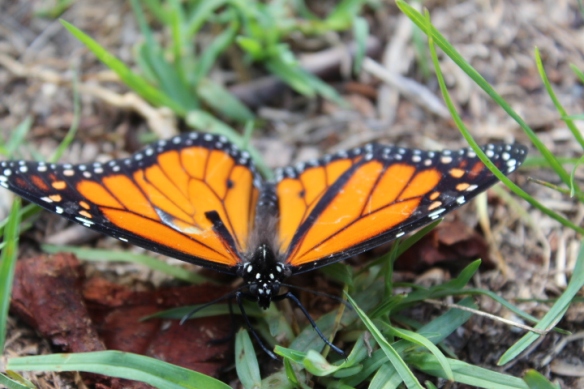 And thanks to a smarter blogger than me who writes over at https://pacificparatrooper.wordpress.com/ (you need to follow him!)  his brilliant comment referenced the “butterfly effect. According to Wiki, it’s a popular hypothetical example of chaos theory which illustrates how small initial differences may lead to large unforeseen consequences over time.

And he doesn’t know it, but this is SO TRUE. As I keep saying, all will be revealed…

Stay safe, my friends, and Happy Autumnal Equinox to everyone!

The motherly milkweed provides sustenance to the Monarch butterfly and is crucial to sustain the species.

Everyone who loves butterflies should plant milkweed and since NObody doesn’t love butterflies, there should be enough milkweed planted to sustain the entire cosmos.

To clarify, I’m not referring to the plural of one my fave cocktails, but the cosmos of our universe. 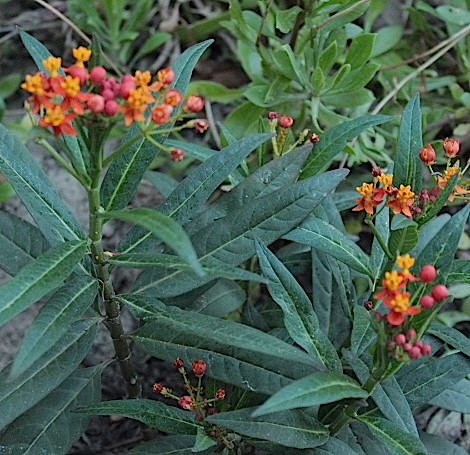 According to Monarch Joint Venture…

Monarchs cannot survive without milkweed; their caterpillars only eat milkweed plants (Asclepias spp.), and monarch butterflies need milkweed to lay their eggs. With shifting land management practices, we have lost much milkweed from the landscape.

Planting milkweed is a great way to help other pollinators too, as they provide valuable nectar resources to a diverse suite of bees and butterflies.

For a brief how-to flyer on planting and gardening, download MJV’s Gardening for Monarchs or the Wild Ones “Wild for Monarchs” brochure.

As soon as I put the plant in the ground, it became inundated with all the Monarchs in my little part of the world. 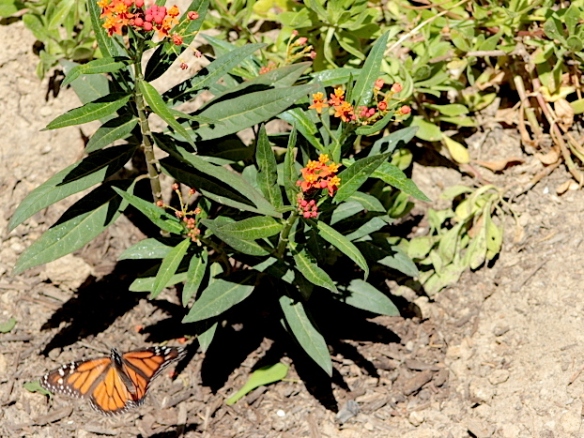 I planted it FAR away from the vegetable garden so the hungry little caterpillars wouldn’t decide to vary their diet and eat all my veggies.

Reminder! Don’t use pesticides or herbicides.

More information at Bring Back the Monarchs
http://monarchwatch.org/bring-back-the-monarchs/milkweed/

…floating effortlessly on the soft breezes, possibly to lift our spirits lowered by the demise of the baby hummingbirds, is a butterfly sprite of cerulean polka dots and bands of gold called Mourning Cloak (Nymphalis antiopa).

With a nod to Lizzi @ Considerings who asked the question on her Facebook page and got me thinking about one of my favorite books, Betty Smith’s 1943 novel, A Tree Grows in Brooklyn; here in my garden, although water use is now restricted because of the drought and we can no longer grow brightly colored but thirsty blossoms, there’s still beauty if you look for it.

Catching some rays on the rock garden.

Can I come a little closer?

What grows in YOUR garden? 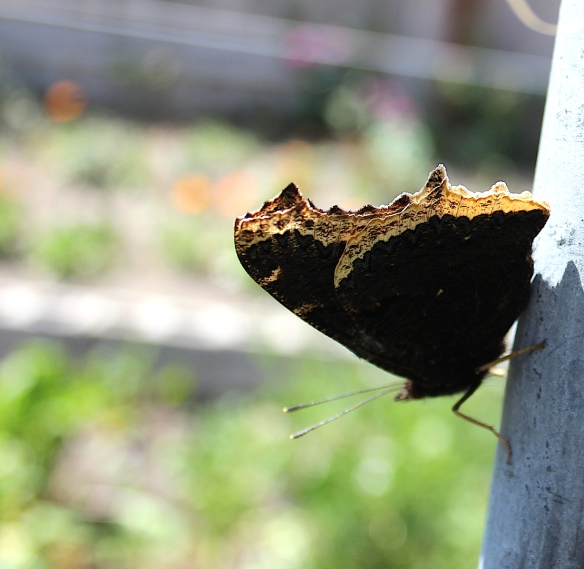